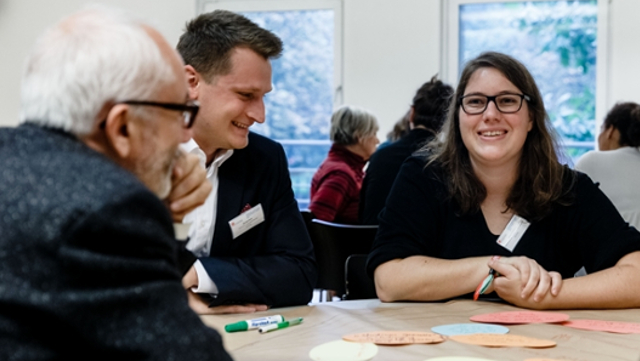 The sessions addressed questions regarding the normativity of science and teaching and the reorientiation of educational curricula towards education for sustainable development. Another core aspect was the role of hierarchies in educational settings and how these can be changed.

Slot 1 ‒ Sustainability Science as a Force for Innovation in Education

The very first workshop in this topic room

“Sustainability Science as a Force for Innovation in Education”

was held by Laura Henderson and Dr. Jana Dlouhá from Charles University Prague and key persons in the COPERNICUS Alliance, one of the co-organizers of the conference. They talked about the importance of new goals, actors and knowledge generation principles in order to implement ESD principles in the future, the opportunities and barriers to developing curricula, institutional insfrastructure and appropriate professional development of teaching staff in accordance with sustainability science methods and principles. Taking up this future orientation. Adesuwa Vanessa Agbedahin (University of the Free State of South Africa) gave an insight into her PHD project

She pointed out how certain social structures and “spheres of influence” can hinder ESD transformation and the achievement of the SDG’s. Practically she suggests special training programs and courses for sustainability leaders as well as a deeper reflection about their effectiveness.

How can new methods of teaching strengthen the motivation of students? And which roles play predominant institutional hierarchies in this context?

Mark Müller-Geers and Marius Hübler (Universität Kiel) gave some practical answers to these questions by talking about their experiences from their own “reframing experiment” in challenging Higher Education Institution hierarchies.

“Participation through Reframing the Lecturer-Student Relationship”

In the workshop participants got an insight into the design and content of the “utopia seminar” which emerged from the PerLe-Project (Project successful teaching and learning at the Universität Kiel). In this course students were given the opportunity to take the role of the seminar leader and reflect in cooperation with the professor on good teaching methods, educational settings and particularly the question: How to build connection and trust in students-teacher relationships.
The results of the practical guided imagination exercise, a “dream journey” where the participants were encouraged to “think utopian” matched the environment Mark and Marius developed in their course: teaching methods of the future should consist of more dialogue, spaces for reflection, shared responsibility, less hierarchy and a good learning environment.

Find more information about their findings and the PerLe-project in the presentation (pdf).

Karla Blöcher presented the Sustainability certificate for teaching students at the Universität Koblenz Landau as an interesting way of integrating Education for sustainable development in teacher education. The fact that more than 50 % of the participating students don’t get credits for the course indicates the positive value of of the certificate gained.

On Wednesday morning Irina A. Shmeleva, assistant professor at University ITMO of St. Petersburg, gave the first presentation of the day about possibilities to implement ESD in teaching at universities:

“University education for sustainable development in Russia: Result of the ESD UNESCO Decade and future vision”

In her talk she gave an insight into the process of promoting ESD in Russia. Due to cultural and societal characteristics, raising awareness about sustainability and more specifically Education for Sustainable Development turns out to be challenging. The Russian translation of the term sustainability is basically “stable development”, and mainly refers to the ecological dimension. Irina observed that Education for Sustainable Development in Russia is mostly seen as a supplement. The fact that less than 5% of Russian universities are involved in ESD activities shows the difficulty to change University Education paradigms. In order to promote this process, she underlines the potential for change in individual and cultural values, a topic which she has been researching for the last decade. A survey about changing values after participating in her ESD courses at the University showed a clear shift in students’ values towards sustainability thinking.

Vincent N. Caruana (chairing the overall workshop) continued with a presentation of his mentoring program at the Centre for Environmental Education and Research at University of Malta.

In the first part of his presentation the participants were asked what is going well for them in their organization and why they care about the future of their organization. The following discussion helped the participants to build a connection from their own background to sustainability and led over to the design of the mentoring program at the University of Malta. Vincent overviewed the different forms of mentoring from peer-mentoring, students-as-lecturer to informal mentoring. In his opinion a good mentoring program should focus on visions and aspirations of the students and staff in order to implement ideas and create innovations rather than focus on problems. The participants were asked another question: “What do we care about deeply? Their resonance varied from the will to change something and contribute to justice to more practical ideas like creating new spaces for dialogue. An important aspect for most of the participants was the interaction and cooperation between people and colleagues, connected with the idea of informal networks that are built on trust. In the end the participants of the workshop agreed that “transforming society has to start at the university”, which can be seen as an experimental lab for new projects and ideas.

Slot 4 ‒ Education for Sustainable Development (ESD) in the Curriculum

“Building blocks and tesserae: a no-frills integration of an education for sustainable development in existing (engineering) courses and lectures”

André‘s way of integrating ESD in engineering courses consists of a variety of teaching methods and a minimal level of hierarchy. In rotating blocks students are encouraged to teach units to fellow students. Different kinds of exercises challenge the students to think outside of the box and broaden their horizon in order to e.g. dealing with uncertainty and complexity. Find more information about “Blue Engineering” and the course design in the presentation (pdf).

Katie Jepson from the National Union of Students in the UK, demonstrated the engagement of the alliance to deeper embed sustainability into the students’ learning contexts:

“A to Z of Sustainability: Integrating ESD into formal and informal curriculum in the UK”

In her presentation, Katie pointed out the importance of the subliminal curriculum besides formal & informal curriculum in the context of a consciousness for sustainability. Therefore the culture and behavior on the campus should be taken into consideration.

The project “From A to Z” aims to collect many examples showing how strongly sustainability touches everyone's (daily) life and encourage students to engage in solving the problems of today’s world.

The last workshop of the day

about “Business School’s Curricula” was chaired by Petra Biberhofer (Vienna University of Economics and Business). She presented the joint Master’s program on sustainability-driven entrepreneurship that was developed in transdisciplinary collaboration settings. The “Competencies for A sustainable Socio-Economic development (CASE)” is an innovative concept for a European Master’s program where ten universities and business partners from five European countries are forming an intercultural knowledge alliance.  It aims to promote new competencies for future change leaders that want to start sustainable socio-economic processes. It is characterized by real-world orientation, HEI business cooperation and cooperation with other universities, an open space knowledge platform and a focus on self-development. The outlook for the future is the implementation at different universities and in different contexts.

During group work Petra asked the audience about possible contributions to socio-economic transformation. Some lively group discussions came to agreement on the point that there should be more interdisciplinary projects in all programs. The accessibility level turned out to be a controversial topic which could lead to further interesting discussions.

“The education goal progress within the sustainable development goals”

Peter gave a very interesting overview of the challenges and chances of the upcoming implementation process of the sustainable development goals (SDG’s) and especially goal 4 (quality education).

Find more information about the SDG’s in the presentation (pdf).

In the reflection phase of the topic room “Education for Sustainable Development”, Laura Henderson from the COPERNICUS Alliance asked the participants to think about what they are taking home from the HSDS and the changes they will make on different levels (myself, my goals, my immediate colleagues, my wider environment, my institution leadership, and the community beyond the university). 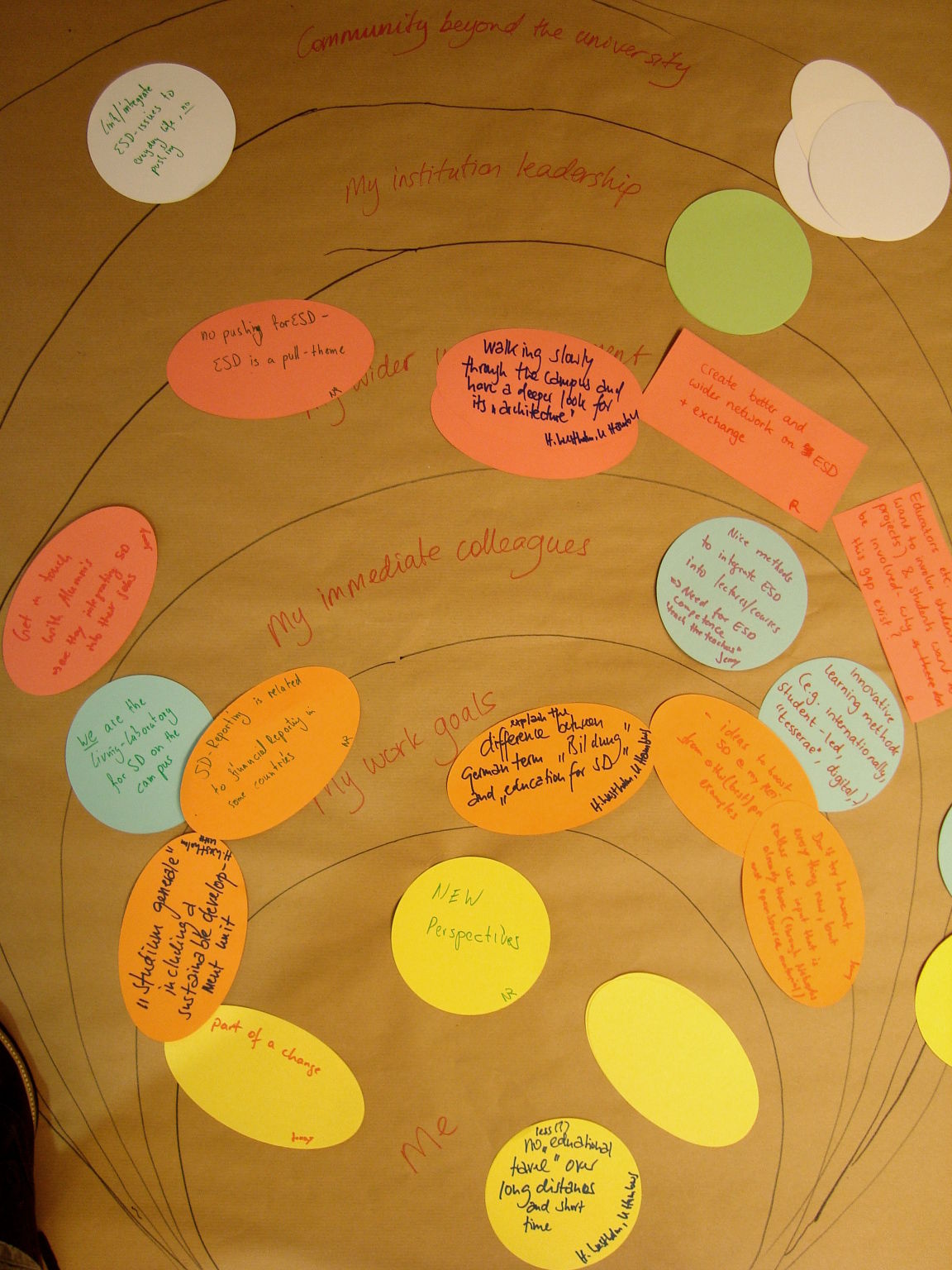 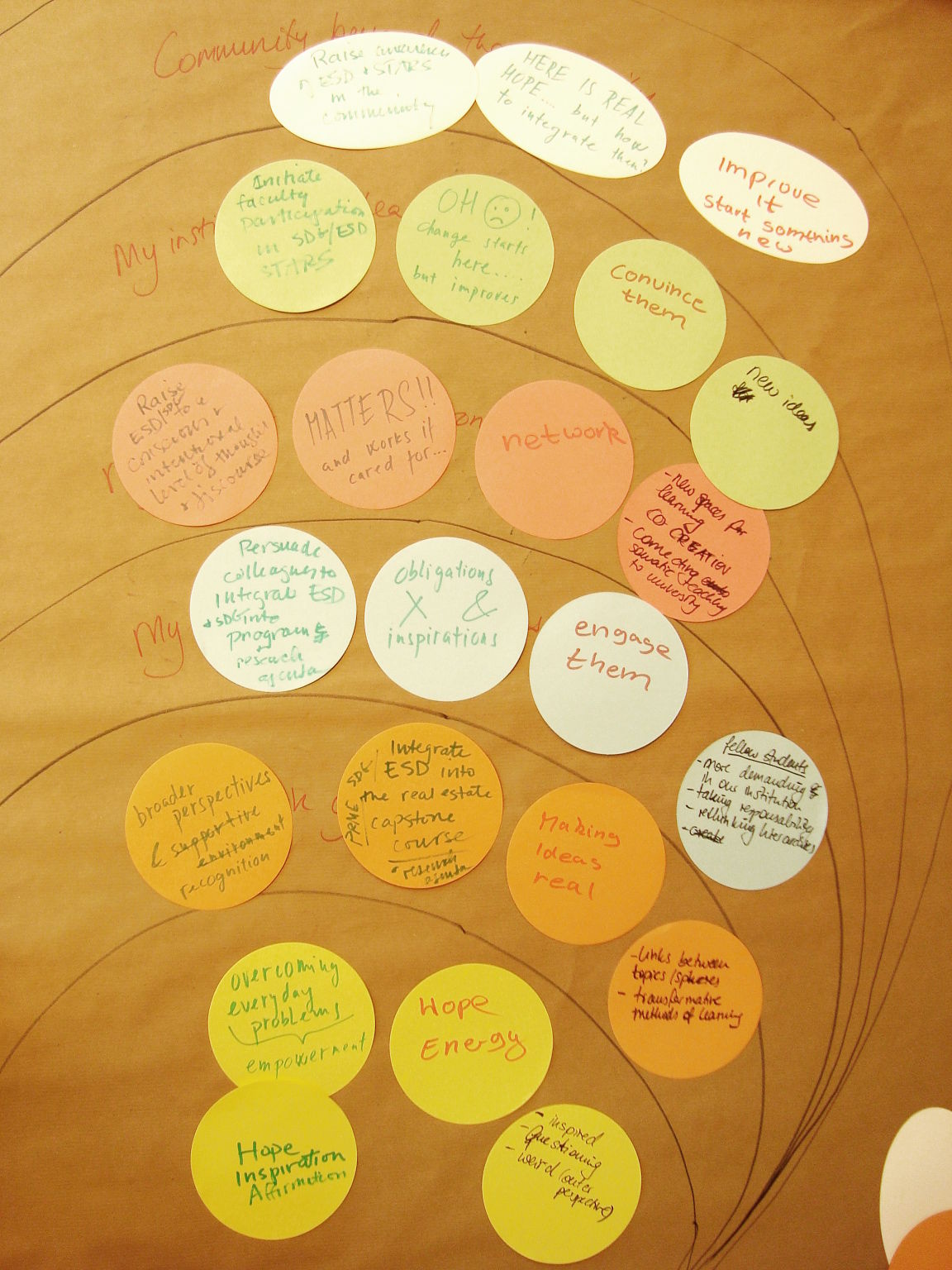 Additionally, two slots in the Topic Room "Methods and Perspectives" have a strong relationship towards education for a sustainable development: